Experimental project of an urban structure based on express road through Silesian Agglomeration. 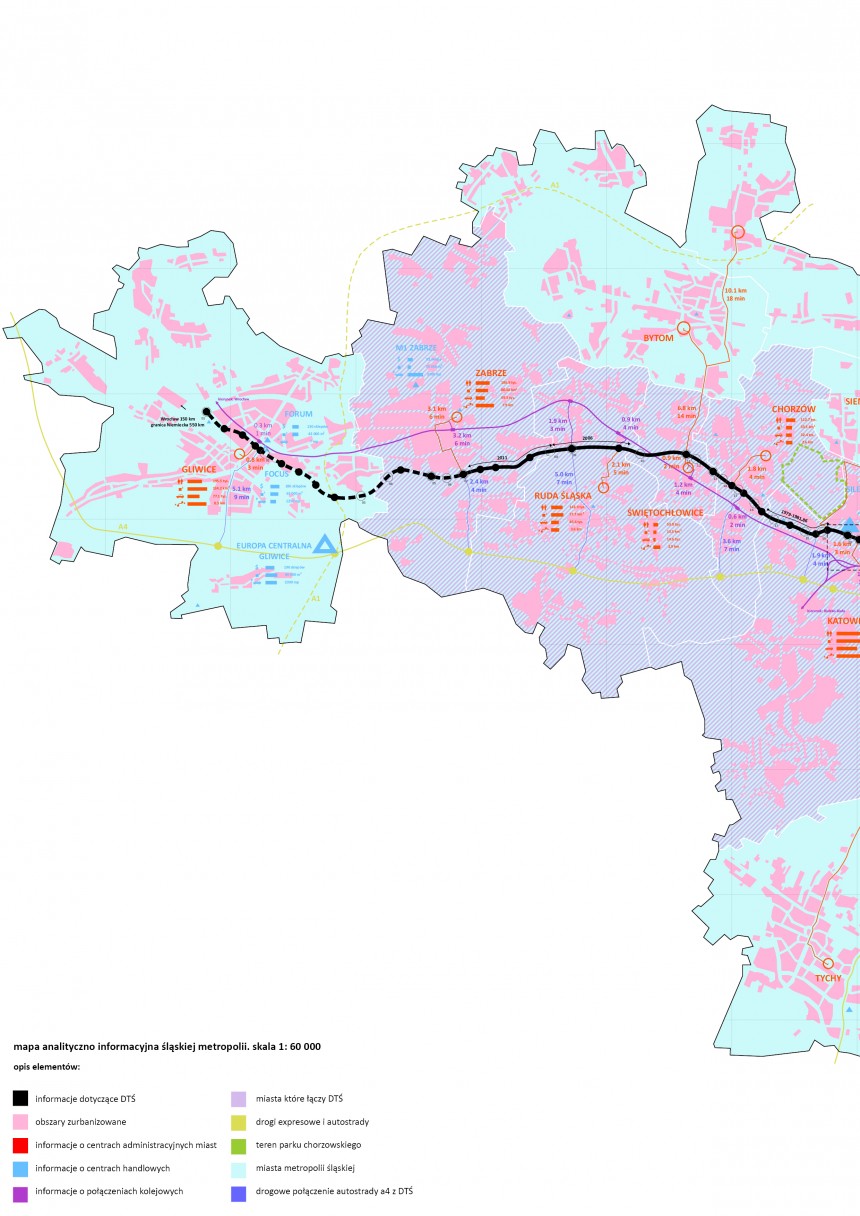 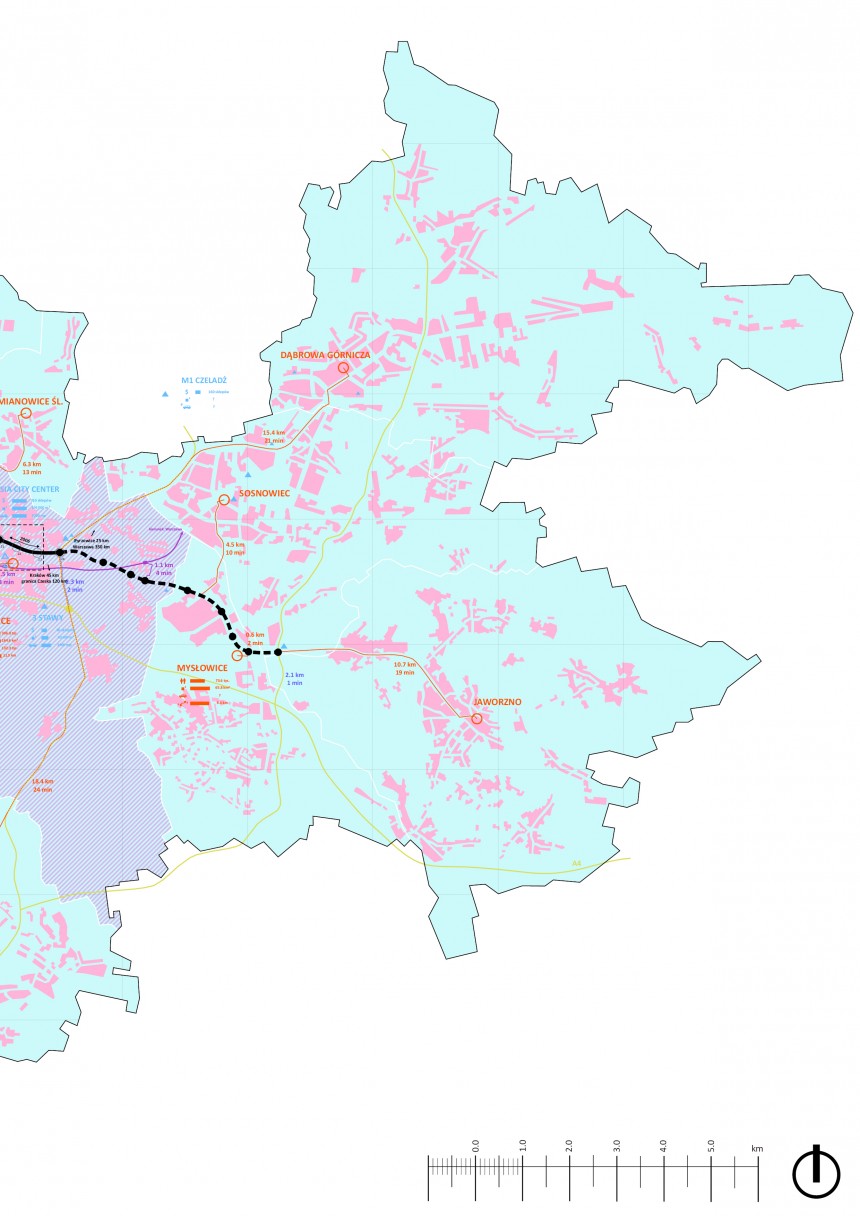 DTS express road is seen as a scar in urban structure, emphasizes its division, prevents its development. Latest largest investments (especially seen in Katowice) indicate the direction of interest – town center is losing, refocusing new investments along the road of DTS. But can we go even further? There is a huge amount of empty space to use. The space above the road has many square kilometers that could be changed into usable areas. Can we, as a result of using this space, create a new type of town, which will completely change the image of our region?

Project “DTS 3d” presents the theoretical development of the urban structure based on the Express Road DTS. Project concept is to use the empty volume above the road to build there a form of a linear city. Catalogue of synthetic sections was created to give direction for design of particular structure segments. Structure development depends on the variety od factors, so its final form can be different depending on the development scenario. As a result we get diverse in functions linear city.

DTS is one of the main way through the Upper Silesian. Now combines the 5 towns of the region but there are plans to extend it further to connect with more cities. Its introduction makes it easy to vehicular traffic in this part of Silesia, increasing the efficiency of movement between them.

In constant process of build, DTS is present in cities since 1979, systematically affects the increasingly larger area. Not just in terms of communication solutions, but also in the field of urban planning. DTS road has changes structure of cities, thus determining their arrangement, giving the direction of extension, affecting the development plan. Route planning gave demolishion of urban quarters, of urban squars. People were often resettled to the newly created residential zones. For some parts this road gives sort of identity for city, where changes were so big space was divided into different parts.

Katowice as a capital city of the region is the most developed. DTS started to be build over here, so its presents is the most obvouse to see. In a wide-ranging discussion on the shape and development of Katowice as the bigging of discusion existance of this road is ejected. It seems that the presence of the Express Road in the urban structure of the city is even glorified. In the manner of speaking of its existence, and by highlighting its important rank. It is here that the most outstanding investment for the region are being built or already exists. Construction of the new headquarters of the Silesian Museum started in 2011. A year later, new building of the National Polish Radio Symphony Orchestra. Next in order is the building of the Congress Centre. Many new office buildings are built as well. And all of these facilities are very much connected with DTS road.

In this sense, it should not surprise us that the progressive degradation of the central part of Katowice. Investments held in the downtown area have a much shorter range.

In developed countries, the aim is rather to minimize the presence of such traffic systems, which do not fit into the contemporary perception of the city. The “Big Dig“, whose construction was completed in 2007, assumed a large-scale reconstruction of the very center of Boston and putting one of the main communication road in a tunnel under the city. This is an example of American solutions, but also closer you can find good examples. Oslo is currently working on another project which assume putting another read into the tunnel under the city. In Katowice huge road system encourage citizens to use car more often.

While the global trend showing that more and more people considered the urban spaces as most attractive, in the case of Katowice people rather leave the town. Most residents were here in 1987 (368 621 people). Since then, the number of inhabitants systematically decreases up to 306 826 people in 2010. At the same time, the process of suburbanization causes an increase in the popularity of such districts as Katowice Zarzecze or Myslowice Morgi that are called “urban bedrooms.” So, again, it is more convenient to people drive by car to the city than live in it.

The whole set of these aspects is the reason for the specific situation. The development of Katowice and other Silesian cities through which DTS road passes or will pass is done in a unique way.

But should we fight with this process. The cities can, or even must be under constant development, since all the enviroment in which cities are associated is changing. If our approach will change, we could switch direction towards even stronger underlining of DTS road influance on the urban structure. Lets make it the most important place in our Agglomeration. Let the issue is to use space of the road for new investments. Creation of one long structure based on the movement of DTS road participant will give as a unique line city as a model of development for this region. 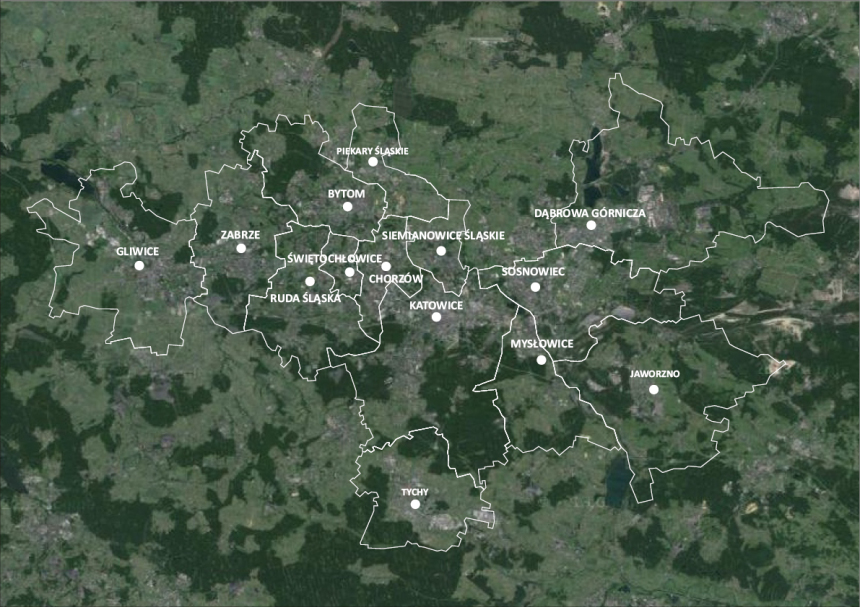 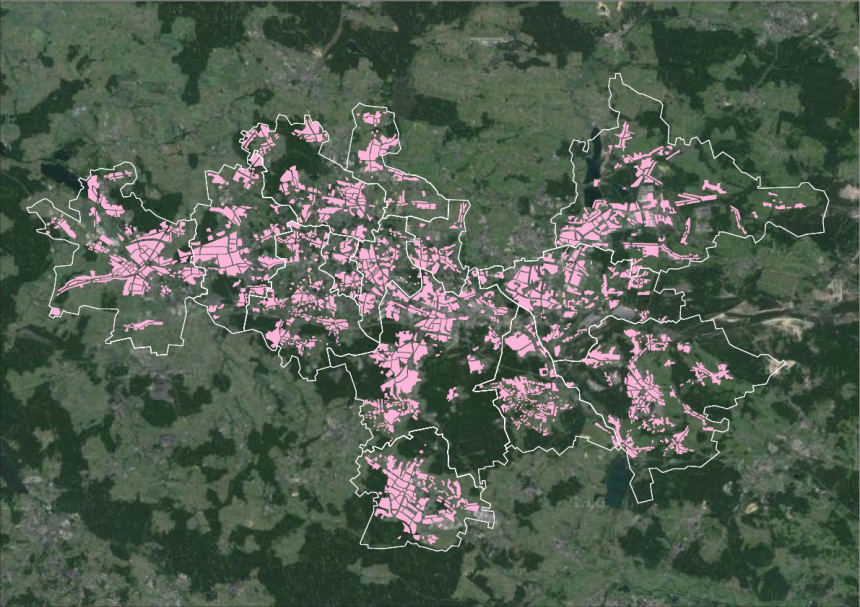 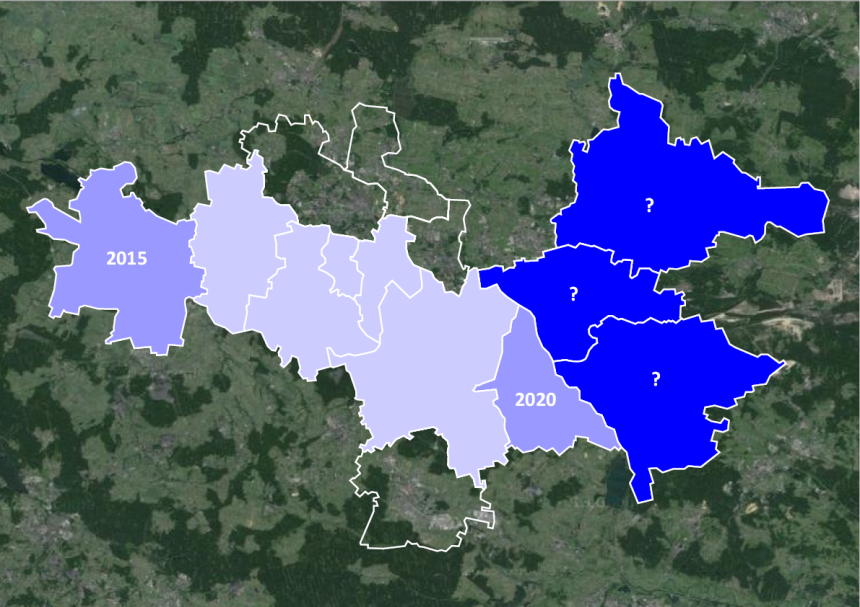 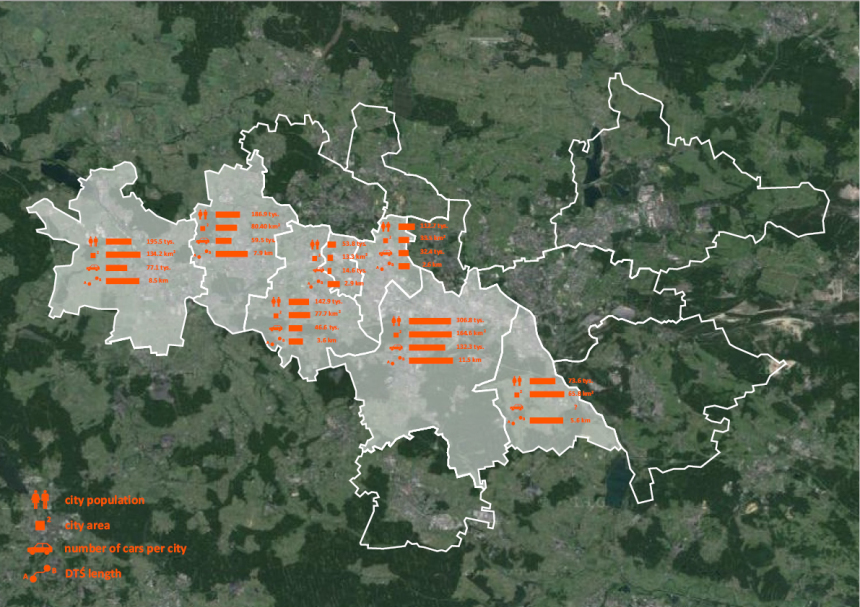 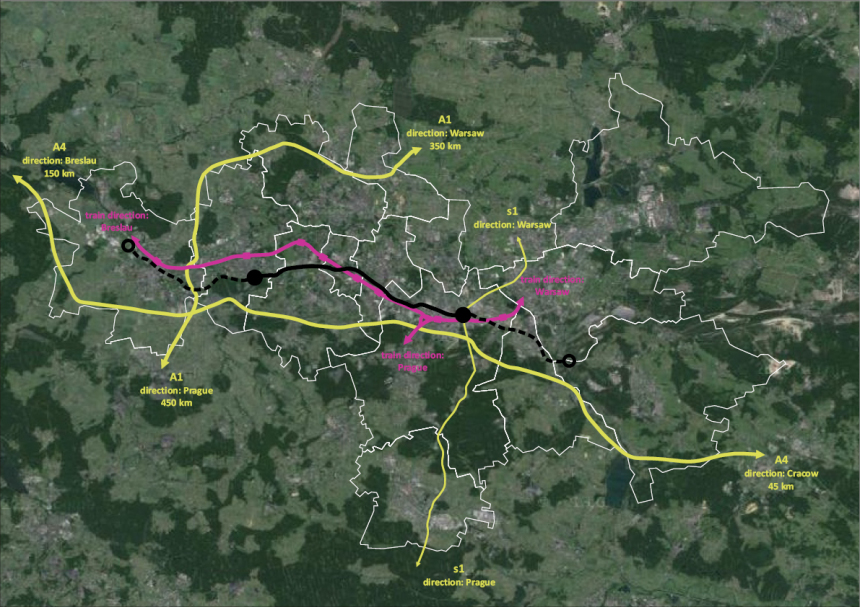 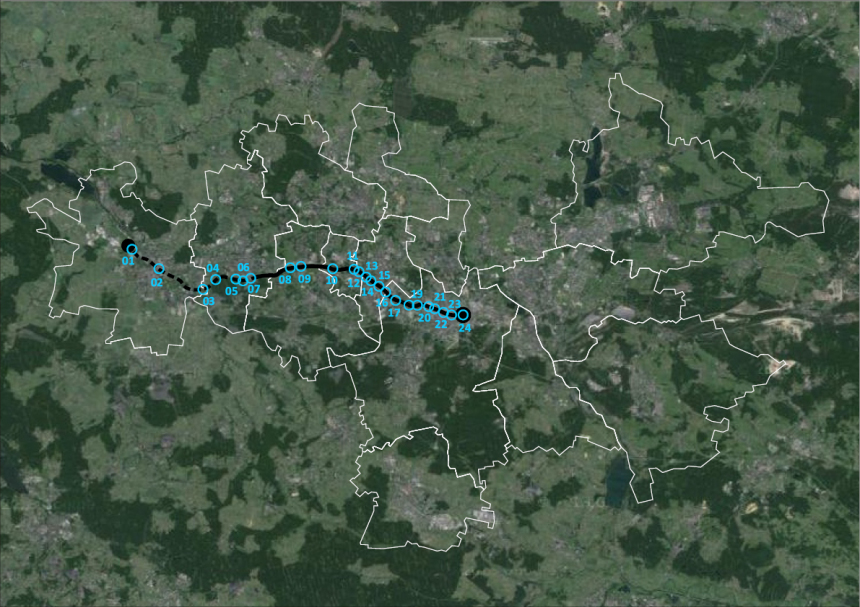 inventory – the most important places of DTS 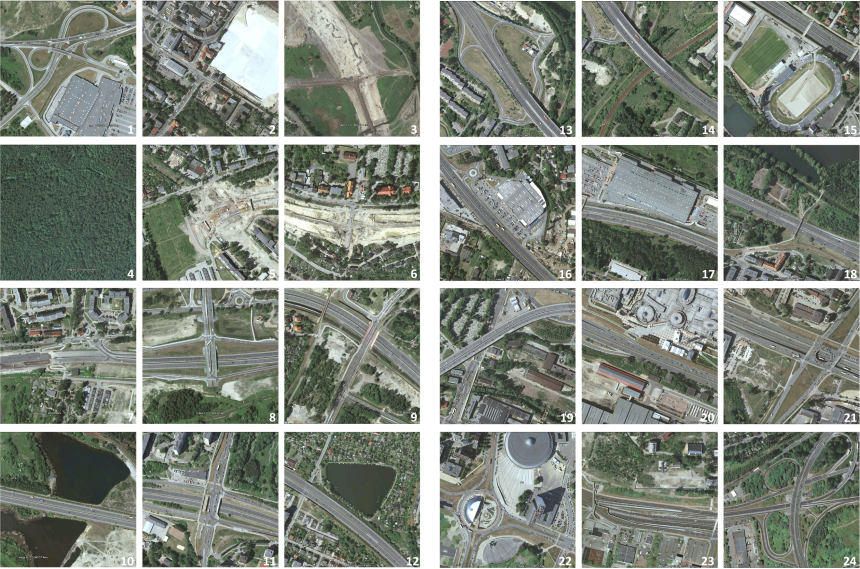 basic scheme (use of empty space above the road):

Summary of achievable data for structure: 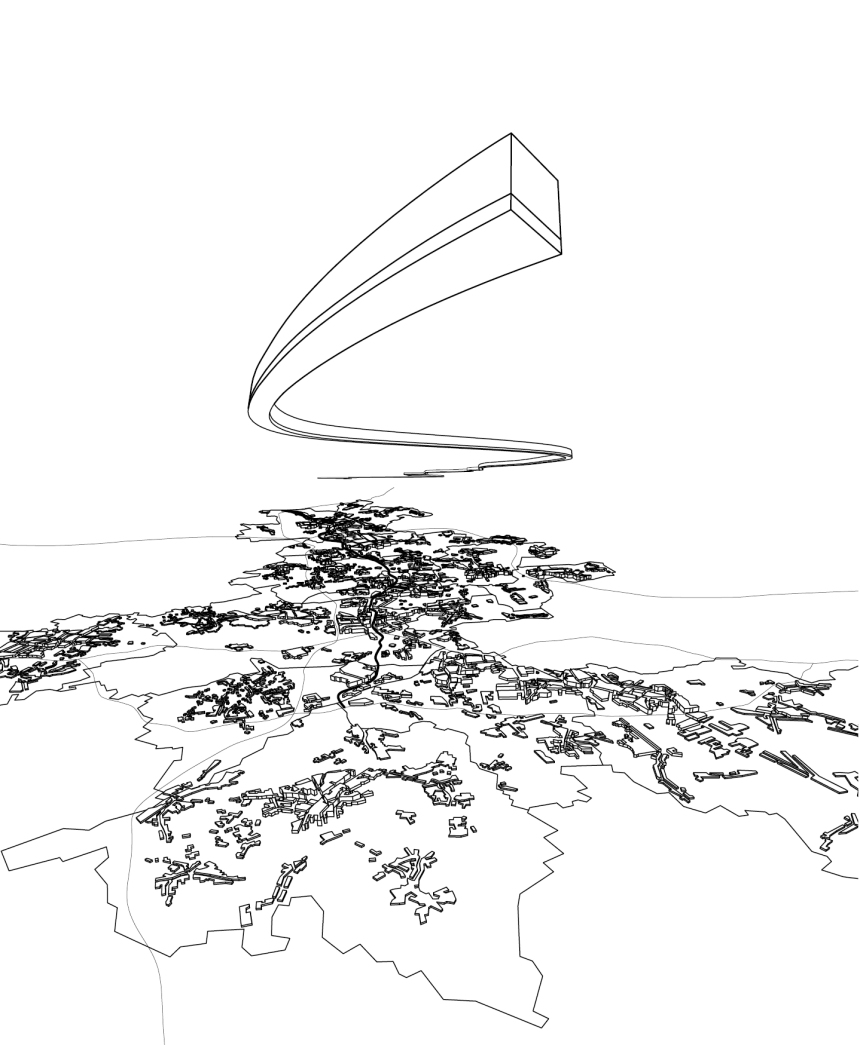 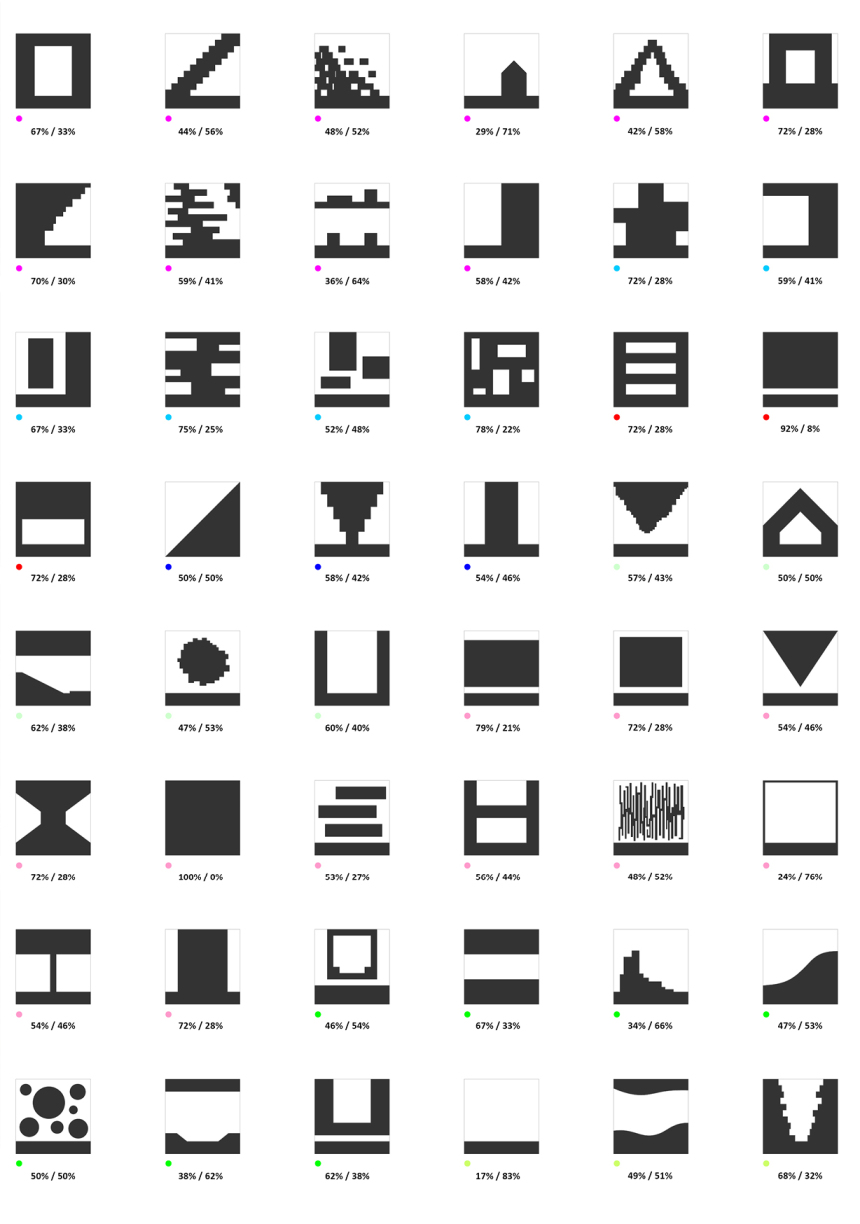 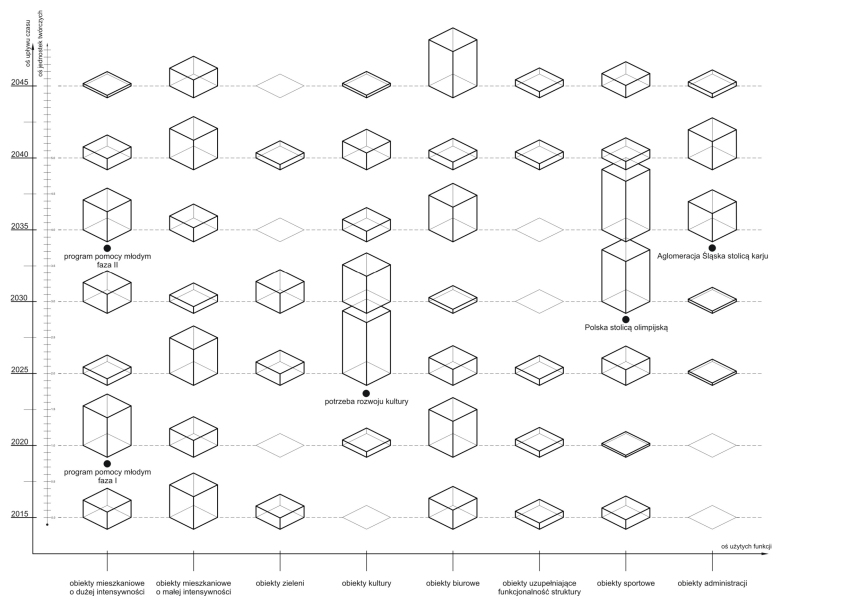 transforming of a section – schematic cross sections finalized as individual segments of the structure:

Segment of a relaxation with parking – floor plans:

diagram of expansion for a segment: 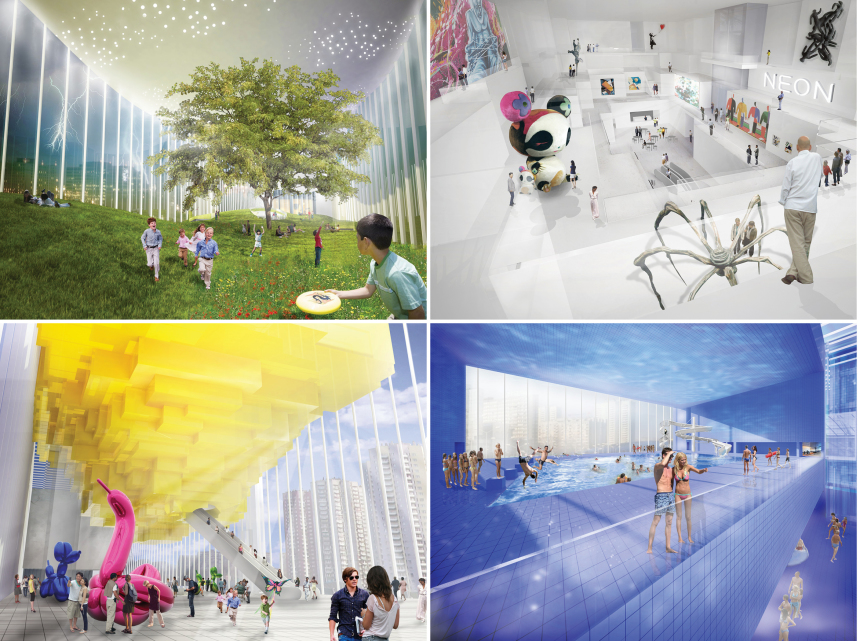